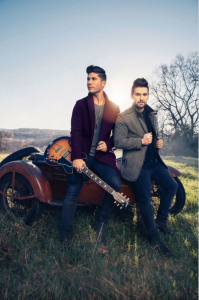 NASHVILLE, Tenn. – (Monday, June 6, 2016) – Platinum-selling country duo Dan + Shay (Dan Smyers and Shay Mooney) will be featured in the upcoming episode of The Bachelorette, performing for one lucky suitor and the newest Bachelorette, Joelle “JoJo” Fletcher. The breakout stars will perform their latest hit ballad, “From The Ground Up,” a heartfelt ode to long-lasting relationships. The song is the debut single from their second Warner Bros. / Warner Music Nashville album, Obsessed, available now. The episode airs tomorrow, Tuesday, June 7, 2016, at 8/7c on ABC.

JoJo Fletcher first stole America’s heart on Ben Higgins’ season of The Bachelor, where she charmed both Ben and Bachelor Nation with her bubbly personality and sweet, girl-next-door wit and spunk. As their relationship progressed, the Texas real estate developer struggled to open up; once she found herself falling for Ben, however, she finally shared her feelings and became one of the final two women vying to be the future Mrs. Higgins. In a shocking twist, Ben confessed his love to both women, leaving them each optimistic that they would be “the one.” Ultimately, JoJo was left heartbroken when Ben chose to let her go in an emotionally gut-wrenching finale. But that experience didn’t stop her desire to find her perfect soul mate — it only made it stronger. Now, JoJo embarks on her own journey to find love as the Bachelorette in the 12th edition of ABC’s hit romance reality series, Mondays (8:00–11:00 p.m., ET/PT) on ABC.

ABOUT DAN + SHAY
Critically acclaimed duo Dan + Shay (Dan Smyers and Shay Mooney) hit No. 1 on Billboard’s Country Albums Chart with their first album Where It All Began, which was released April 2014. Racking up more than 26 million YouTube views, they are the only new country duo in SoundScan recorded history to debut at No. 1. Additionally, the pair has impressively sold over 1.5 million digital tracks and over 375,000 album equivalents to date, which includes 120 million streams. Their last single “Nothin’ Like You” hit No. 1 at Country radio, while their debut single “19 You + Me” has been certified Platinum by the RIAA. Dan + Shay have been nominated for both CMA and ACM’s “Vocal Duo of the Year” for two years in a row, and are currrently nominated for a CMT Music Video Award. Their sophomore album, Obsessed, was released June 3, 2016 and the first single, “From the Ground Up,” has already connected with listeners, debuting as the No. 1 most added song at country radio and rapidly climbing the charts. Dan + Shay finished up 2015 with their headlining Just the Right Kind of Crazy Tour and are currently on the road with Darius Rucker on the Good for a Good Time Tour. For more information please visit DanAndShay.com and follow @DanandShay on Twitter and Instagram.

ABOUT THE BACHELORETTE
Romance, rivalry and, quite possibly, true love! One lucky woman gets the opportunity to find the man of her dreams — and, she hopes, her groom-to-be — in this hit reality series. This single and eligible bachelorette — a confident, successful and sensitive woman who is ready to find love — will embark on a romantic journey as she meets single and eligible charming men. As the Bachelorette gets to know each one, she’ll continue to narrow the field. They will travel to exotic locations and spend time getting to know each other; she will introduce them to her family and friends and meet some of theirs. At the end of her romantic voyage, if she has found Mr. Right, will there be a proposal — and from whom? Hosted by Chris Harrison, The Bachelorette is produced by Next Entertainment in association with Warner Horizon Television.
For more information on The Bachelorette, visit http://abc.go.com/shows/the-bachelorette.